Why Is Lung Cancer Rising Among Nonsmoking Women?

FOR YEARS WHEN REBECCA Falzano was living in New York City, she woke up every morning wheezing and catching her breath. Her doctor told her she had asthma, but no inhaler fixed her difficult breathing.

She thought she would get better when she moved to Maine – what she knew as home of the Breathe Easy Coalition – but her symptoms got worse. Finally, her doctor recommended a CT scan. She was floored by the result: There was a tumor on her lung.

“This blindsided me as a 28-year-old, active, nonsmoking woman,” she says. “I had a lot of the stereotypical thoughts about lung cancer. I thought it was a smoker’s disease. I thought, ‘How could I possibly have this?'”

Falzano is among one in five women who has lung cancer but has never smoked. She and others with the disease struggle with the stigma tied to lung cancer – when Falzano tells people about her disease, their first question is whether she smoked. She often responds, “Why does that matter?” Lung cancer advocates like Lecia Sequist, a medical oncologist at Massachusetts General Hospital Cancer Center and associate professor of medicine at Harvard Medical School, say too much shame and guilt is imparted on those with the disease, and it prevents people from talking about lung cancer, which leads to little awareness and advocacy.

Falzano had surgery a month after she was diagnosed in 2010 and then married her husband four months later – balancing wedding planning and an excruciating recovery. Now 32, she works as an editor of a home design magazine in Portland, Maine, and is focusing on being a new parent to a healthy baby girl. “Cancer is never a gift,” she says, “but it is certainly an opportunity to evaluate what’s important in life.”

Lung cancer takes more lives than breast, prostate, colon and pancreatic cancer combined, according to the American Lung Association. The five-year survival rate for those diagnosed with lung cancer is 16 percent. Sequist says there have been some breakthroughs in treatments. The lung cancer rate has fallen 21 percent among men, but for reasons that remain unclear, the rates have risen 116 percent among women. About 160,000 people die from lung cancer every year, according to the National Cancer Institute, and more than half die within one year of being diagnosed. 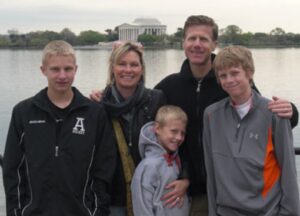 Diane Legg has lived with late-stage lung cancer for seven years. She is pictured here with her husband and three boys.

Diane Legg, 51, has lived with late-stage lung cancer for seven years. Doctors discovered the growth by accident in 2004, through a CT scan that was meant to check on a pulled back muscle. When she went to see a pulmonologist, he told her it was highly unlikely she had lung cancer given her health history. Still, she knew anyone could be affected. A friend, who was also a nonsmoker and had a healthy lifestyle, was diagnosed with lung cancer four months earlier. During Legg’s biopsy, her friend was at the back of her mind. She thought, “Could this happen to me, too?”

The doctor called her and confirmed she had lung cancer. “It was absolutely shocking and appalling,” she says.

Legg underwent surgery and chemotherapy. Throughout the treatment, she continued to work in industrial sales for General Electric. Her friend had undergone the same treatment, but died only nine months after she was diagnosed. As a result, Legg became heavily involved in advocacy and awareness efforts.

Her lung cancer returned in 2006. The tumors are growing slowly, so she isn’t undergoing treatment, but will do so in a few months. She suffers shortness of breath, fatigue and coughing. She resigned from her job to focus on her health and has become heavily involved in LUNGstrong, a nonprofit she founded that raises money for lung cancer research. She’s also focusing on her husband and three boys. “The most important thing for me during my entire life was to be a mom,” she says. She also does endurance sports and says lung cancer hasn’t stopped her from living an active life. “Having a respiratory disease, but being able to do such physical activities has been freeing for me,” she says.

The causes of nonsmokers developing lung cancer remain unclear. Some people who never smoke appear to be more susceptible to the disease, while others smoke their entire lives and never get lung cancer. The International Agency for Research on Cancer, a branch of the World Health Organization, announced in October that air pollution was a leading cause of lung cancer. 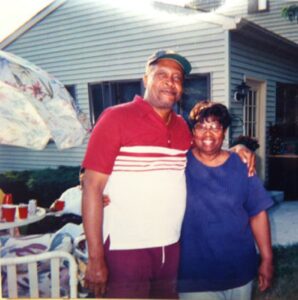 Other causes of lung cancer include secondhand smoke, genetics and exposure to radon, uranium, arsenic, nickel and hazardous chemicals like asbestos. Heather Edmonds, 35, of Washington, D.C., lost both of her parents to lung cancer. Neither smoked, so she had their house tested for radon. The results came back negative. Her siblings thought there might be asbestos in the buildings where they worked, but no tests were conducted.

Edmonds, her father and her brother were caretakers for their mother. When her father was also diagnosed with lung cancer, her sister helped as well. “My mom isolated herself from people,” Edmonds says. “I would take her on car rides to get her out of the house, but she would never get out of the car. My dad was stubborn because he wanted to do all the things he used to, but he physically couldn’t, and that’s what frustrated him the most.”

Edmonds reflected on the emotional difficulty of being a caretaker. “I tried to be positive around them all the time,” she says. “I felt helpless because I didn’t know how to fix their cancer. I would never cry in front of them because they needed strength to get through the chemo, radiation, hair loss, weight loss and feeling sick. It’s physically demanding with the cleaning, cooking, hygiene and going to appointments. I became a comedian of sorts just to make my parents laugh.”

November is National Lung Cancer Awareness Month, and advocates are working to erase the stigma associated with the disease, which they say results in lower funding for lung cancer research. The anti-smoking efforts began as a way to educate the public about the dangers of smoking, but turned into “equating smoking to evil,” Sequist says. Society thinks of lung cancer as something people have brought upon themselves, so there is less sympathy around it, she adds.

About the author: Kimberly Leonard is a former health care reporter for the News division at U.S. News. Previously she worked in Health Rankings as a multimedia producer and reporter.